Is this due to a production fault?

If the answer to this question is yes, the warranty period is two years from when the cylinder head started operating in the engine, regardless of the number of kilometres travelled.

Cylinders returned to AMC to be checked must be protected for shipment with proper packaging. It is the responsibility of the customer to ensure that the cylinder head is properly packaged.

CAUSES OTHER THAN MANUFACTURING PROCESSES

Any failure produced by causes other than the manufacturing processes of AMC, such as incorrect assembly of the cylinder head in the engine or of any of its components, the use of low-quality cooling agents or lubricants, the abusive use of the engine or if there is evidence of not having carried out the relevant maintenance operations will invalidate the warranty.

Some camshaft support bridges or fittings due to over tightening or mounting the bridge incorrectly.

The injector housing, due to over tightening.

In some other parts of the cylinder head due to over tightening during the assembly of components, such as anchor bolts, pre-heater, etc.

Knocks or scratches on new cylinder heads caused outside our facilities. In particular, on camshaft bridges, caused by dropping or knocks.

In the lower part of the injector housings due to them not being sufficiently tightened, and causing high temperature gases to escape. This can also occur when old, damaged or flattened washers are used.

Erosion of aluminium can also be caused by incorrectly tightening the cylinder head anchor bolts, prolonged overheating or a malfunction of the turbocharger system.

In case of claim 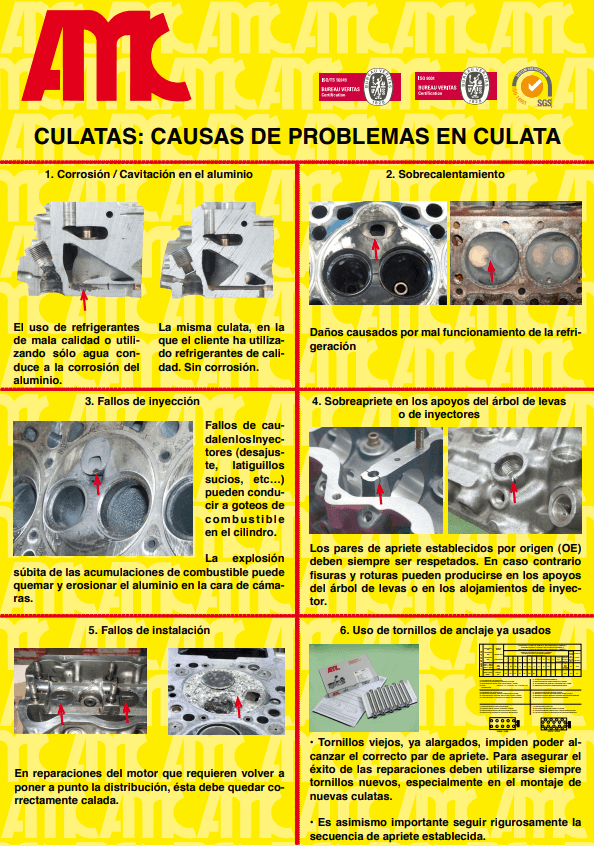 In the case of having a claim, please fill out the attached form, explaining the problem and providing details. The form must contain your address, telephone number and the sending of complete details, as specified below.

· Approximate date of when the cylinder head was mounted on the engine.

· Causes that led to the cylinder head being disassembled.

Thank you for purchasing our products

We use our own and third-party cookies for analytical purposes (for example, pages visited). Click here for more information. You can authorize the transfer of data to third parties and accept all cookies by pressing the "Accept all" button or configure them and accept the ones you choose:

Accept all Accept selected ones